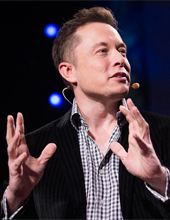 There is an American entrepreneur who is often compared to Iron Man, the tech-savvy Marvel Comics superhero. He founded Paypal, Tesla, SpaceX, and Solar City. His name is Elon Musk.

What were the factors that allowed Musk to accept challenge after challenge in order to improve humanity?

How was Musk able to shift the paradigm of four notoriously conservative and capital-intensive industries (finance, automobile, energy, space travel)?

I. Childhood to college: Musk dreams of a better world.

Elon Musk was born in South Africa, and from a young age, he displayed an above average ability to learn and absorb information, especially in computer programming.

Feeling his intellectual growth stunted in South Africa, Musk moved to the United States at age 17.

In college, Musk defined five areas that will most affect the future of humanity and decided to dedicate his life to commercializing at least three technologies that would positively contribute to humanity

After graduating from UPenn, Musk moved to California to pursue a PhD in applied physics and materials science at Stanford University.

However, with the dawn of the internet age in 1995, Musk decided to become an entrepreneur in the internet industry instead.

However, aspiring to innovate with the internet, Musk invested ¾ of his fortune into starting X.com, an online banking startup, which later merged with Peter Thiel’s Confinity to become Paypal.

III. Challenge #2: daring to push the boundaries of the space, energy, and automobile industries.

After conquering the internet, Musk spent four years, starting in 2002, to found three companies back to back.

However, in the mid-2000s, SpaceX and Tesla both faced severe crises. In addition, Musk’s personal life was in shambles due to a messy divorce.

Despite all these difficulties, Musk miraculously overcame each crisis and has continued on his quest to change the world.

Musk has been changing the auto and energy markets by lowering industry norms for carbon emissions.

Musk has inspired young adults everywhere to challenge themselves to think creatively and make a positive impact on the world.

What are the lessons we can obtain from Elon Musk’s life? How can we apply these lessons to our own lives? What are the drivers and motivators in your life?

Please discuss this topic with your Ringle Tutor, and seek to understand your passion and the goals that you seek to pursue.