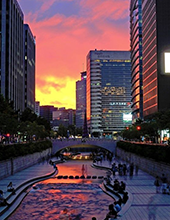 Thanks to the dedication and sacrifice that our grandparents’ generation made, South Korea which was one of the poorest countries in the 1950s became an exporter of cutting-edge products, just in half a century.

However, another major crisis dawned on South Korean economy that was rapidly booming.

In 1960s to 1990s, the government, corporations, and people in South Korea were united for the mission to eradicate poverty and to become a developed country. But this process was not without side effects.

In 1990s, even the corporations lacking competency bribed the president to receive funding from the government and expanded their business through reckless investment.

However, the Asian Financial Crisis in the mid 1990s became one of the worst crises for Korean businesses.

When South Korea was facing such a dire circumstance, South Korean people created another miracle.

Ironically through the Asian Financial Crisis (also known as “IMF Crisis” in South Korea), Korean corporations were not killed but made stronger in the global market.

4. After 2014: Another Crisis Facing the Current Generation

South Korean manufacturers are facing another crisis due to high-tech companies from Silicon Valley and Chinese companies growing rapidly.

In the midst of all this, politics is in a hot mess; former President Lee Myungbak wasted the national coffers and President Park Geunhye is accused of corruptions.

South Korean people are not shying away from this crisis.

Will South Korea reenact the glory handed down by the grandparents’ and parents’ generations? Will this be a prologue for the new chapter of economic growth?

Videos
Articles
South Korea: One of the World’s Great Success Stories Heads to the Polls
또는