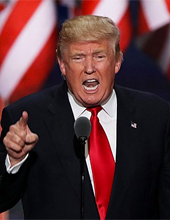 Let me tell you something, this is the most pathetic, stupid introduction I have ever seen! Sad! I kid you not, we need to report this person to Ringle’s founders, and no one does that better than me, believe me.

I have gotten so fed up with this tutor-curator named Diana lately, I kid you not. I tell you what, I’m going to make a new course material. It will be a very good material, and I will fire people like Diana from the service. And quite frankly, terrible tutors like Diana are just as bad as Crooked Hillary.

In case you couldn’t tell, I was mimicking Donald Trump’s rhetorical style. Donald Trump is like a cat. You either love cats or you don’t; you either love Trump or you don’t. You can make a case for or against him. But one thing that can never be refuted is that he is not the most eloquent speaker.

So today, I challenge you to write better than Mr. Trump. Imagine that you are an editor of Mr. Trump’s speech. How would you revise it?

I know it’s all in you. You’ve got this. Let’s make your writing great again.

Best, Greatest, the most amazing, and YUGE wishes,
Diana

Read the following excerpts from the first presidential debate between Donald Trump and Hillary Clinton on September 26, 2016. Then make notes how you would revise his remarks.

As far as my tax returns, you don’t lear that much from tax returns. That I can tell you. You learn a lot from financial disclosure. And you should go down and take a look at that. The other thing, I’m extremely under-leveraged. The report that said $650—which, by the way, a lot of friends of mine that know my business say, boy, that’s really not a lot of money. It’s not a lot of money relative to what I had.

The buildings that were in question, they said in the same report, which was actually, it wasn’t even a bad story, to be honest with you, but the buildings are worth $3.9 billion. And the $650 isn’t even on that. But it’s not $650. It’s much less than that. But I could give you a list of banks, I would—if that would help you, I would give you a list of banks. These are very fine institutions, very fine banks, I could do that very quickly.

I am very under leveraged. I have a great company. I have a tremendous income. And the reason I say that is not in a braggadocios way. It’s because it’s about time that this country had somebody running it that has an idea about money.

Response regarding cyberattack
Moderator’s question: “Who is behind it and how do we fight it?”

As far as the cyber, I agree to parts of what Secretary Clinton said. We should be better than anybody else, and perhaps we’re not. I don’t think anybody knows it was Russia that broke into the DNC. She’s saying Russia, Russia, Russia, but I don’t—maybe it was, I mean, it could be Russia, but it could also be China. It could also be lots of other people. It also could be somebody sitting on their bed that weighs 400 pounds, OK?

We came in with the Internet, we came up with the Internet, and I think Secretary Clinton and myself agree very much, when you look at what ISIS is doing with the Internet, they’re beating us at our own game. ISIS. So we have to get very, very tough on cyber, and cyber warfare. It is—it is a huge problem. I have a son. He’s 10 years old. He has computers. He is so good with these computers, it’s unbelievable. The security aspect of cyber is very very tough. And maybe it’s hardly doable.