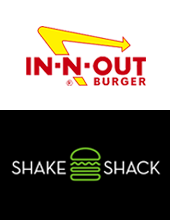 Shake Shack, a fast food chain representative of the East Coast of the US, recently opened up in Korea’s Gangnam district and has been tremendously popular.

With the enormous success of Shake Shack, Koreans have begun to develop an interest in In-N-Out, another prominent player in the US high-quality burger market.

The comparisons people make between Shake Shack and In-N-Out are as common as those made between Stanford and Harvard, or between NYC and SF. This age-old battle demonstrates just how much people love these two chains in their own ways.

Shake Shack was established by restaurant industry bigwig Danny Meyer. Thus, the chain required little effort to achieve the $1.5 B market cap and become a unicorn among fast food chains.

In-N-Out, on the other hand, had humble beginnings as the brainchild of WWII veteran Harry Snyder, who opened the first store in 1948. In-N-Out has been around for over 70 years in the Western/Mid-Western United States.

Quality is a point emphasized by both Shake Shack and In-N-Out, and the two companies also make it a point to keep the employee satisfaction rates high.

The two companies differ greatly in the prices of their food and restaurant positioning tactics.

Shake Shack and In-N-Out have yet to infiltrate into each other’s territories. However, the two companies are still in fierce competition for their customer’s loyalty and support.

Which of the two chains do you prefer? If both Shake Shack and In-N-Out were available in Korea, which company do you think would be more successful? What lessons can we obtain from the two companies?

Please take this opportunity to talk about Shake Shack and In-N-Out with your Ringle Tutor and listen to their opinions as consumers of either or both products.

Videos
Articles
Shake Shack’s Secret Sauce? It Cares.
The Story of How In-N-Out Made It Big Will Make You Love It Even More.
I tried Shake Shack and In-N-Out side by side — and it's clear which one is better
또는