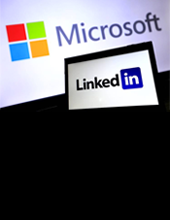 Microsoft, one of America’s leading IT corporations (share price $400), recently announced its purchase of LinkedIn.

Both companies have expressed their desires to use this M&A as an opportunity to take the lead in the business to business (B2B) solution market.

However, it is no secret that both companies were being cornered by competitors prior to the acquisition. Doubts have been raised whether this M&A will be enough to help Microsoft and LinkedIn defeat such other B&B giants as Google, Amazon, and Apple.

There is much speculation regarding LinkedIn’s uncanny decision to merge with Microsoft. This is especially pertinent because just last year, LinkedIn had expressed its desire to expand its services and increase the company value.

Why do you think Microsoft was willing to pay a whopping $25B to acquire LinkedIn? Do you believe that Microsoft will be able to use this merger to fight off Google, Apple, and Amazon? Do you think that perhaps Microsoft’s move was a preventative one so that Google, Salesforce, and/or Facebook would not be able to get to LinkedIn first?

Please discuss this topic with your Ringle Tutor. Talk about the extent to which Microsoft has shrunk in the eyes of American college students, and what their thoughts are of LinkedIn.