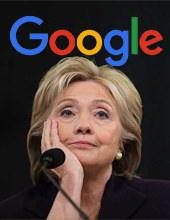 Google is one of the few institutions that wield a tremendous amount of authority over the US presidential election.


In June, 2016, a news website called SourceFed (SF) released a controversial Youtube video, which claimed that Google may have manipulated its Search Autocomplete function in favor of presidential candidate Hillary Clinton.


SF has suggested that there may be a powerful collaboration between Google and Hillary and that Google may showing its support for Hillary in this way.


At the same time, the majority of American media supports the view that Google is indeed blameless in this controversy.


However, despite Google’s clarifications, a smattering of experts continue to assert that Google is indirectly supporting the continuation of the Obama ⇒ Hillary legacy.

⇒ There are concerns that the government and Google are engaged in a “back-scratching alliance.” That the purported alliance is based more on policy measures rather than on money is becoming an increasingly polemic societal topic.

What are your thoughts on the possibility that Google may be manipulating their search engines in order to influence elections? Do you think these companies are 100% objective? Or do you think claims of their objectivity are excessively delusional?

Please talk about the current US presidential election with your Ringle tutor, and take the opportunity to improve your English speaking.