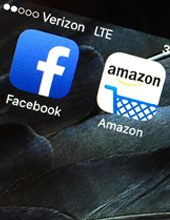 FANG is an acronym for “Facebook, Amazon, Netflix, Google”, the four companies that have been dominating the tech market in the past year.

Recently, Twitter asked users to pick the most attractive stock option of the FANG companies, and results found Facebook in 1st and Amazon in 2nd.

Because of its enormous advertisement revenues and AI/VR-related growth potential, Facebook has been rated favorably and continues to dominate the messaging/social network market.

Amazon has 1) secured its sales and dominated the retail and cloud market, and 2) is rated highly in the IoT field and predicted to experience great growth in the coming years.

What are the key differences between Facebook and Amazon’s industries? How does each company imagine its future? In you opinion, which of the two companies is likely to be more valuable to consumers in the future?

Please take a moment to discuss this topic (in English) with your Ringle tutor, who is likely to have grown up with Facebook and Amazon and been influenced by these two companies.