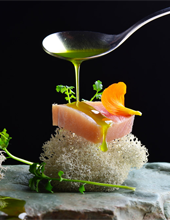 Currently, South Korean people are fascinated by celebrity chefs and their creative cooking.


New York City is a place where the world’s top chefs have opened their restaurants and it is where numerous Michelin-starred restaurants are located.


The first article introduces and talks about twelve Michelin-starred restaurants in NY.


The interview provides Chef Yim Jung Sik’s perspectives on the globalization of Korean cuisine and the trend of New York fine dining restaurants.

Videos
Articles
#1 Article, #2 Article are in the PDF file.
또는