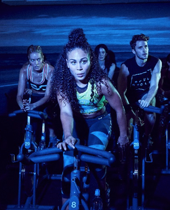 Could they bring a wind of change to the fitness industry?

SoulCycle has turned spinning, once thought of as a boring exercise, into a social phenomenon.


Although Zukerman, a co-founder and popular instructor, left the company, SoulCycle continued growing explosively with an eventual investment from Equinox.

With special instructors, SoulCycle redefined spinning as both an exercise program and a business.


SoulCycle co-founders wanted their company to be a community that brings a wind of change to the fitness industry.

Equinox assessed the growth potential of the boutique fitness market to be very high and acquired the rest of the SoulCycle shares to run the company directly.


With the continued emergence of new competitors bringing novel business features and concepts, competition within the boutique fitness industry is growing fiercer.

There are two lessons we can learn from SoulCycle.

Lesson 1: SoulCycle had three factors of success, including: the active steps the co-founders took to meet the needs of the market; outside investment which allowed for an explosive growth; and management capabilities coming onboard at the right time.


Lesson 2: SoulCycle made itself special by sticking to its unique qualities in the face of increasing competition and several crises.


Have a 1:1 debate with your Ringle tutor about SoulCycle as you improve your English skills.