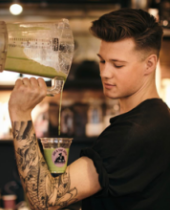 Quality conversations against the rise of automation

I. Joe & The Juice’s brand of establishing customer affinity


Basse was convinced that his company’s culture and point of differentiation from competitors would revolve around human interaction and intimacy.


Basse has made Joe & The Juice the trendiest brand by hiring employees who fit with his business philosophy and providing them with opportunities for freedom and growth.


Joe & The Juice maintains both high profitability and rapid growth, striving to maintain and strengthen its culture and brand identity.

II. Automation technology that provides a new experience to customers

Machines have begun to take over human roles in the service industry for a variety of reasons, including advances in technology, rising labor costs and labor shortage, and new consumption trends.


Automation is bringing many changes in customer experience with products and services.

Joe & The Juice must reconsider whether its primary selling points—fresh ingredients and the culture of communicating with customers—are still effective in the midst of these changes in the industry and market.


Human job crisis caused by automation and customer perception are challenges that must be addressed moving forward.

There are two lessons we can learn through Joe & The Juice and the rise of automation.

Lesson #1: Properly running recruitment, assessment, and compensation systems according to the vision and values pursued by the company creates a strong corporate culture that can realize the company vision.


Lesson #2: Technological advances are changing the paradigm of the service industry.

Discuss “Joe & The Juice and Automation” with your Ringle tutor, and also receive feedback on your English usage.