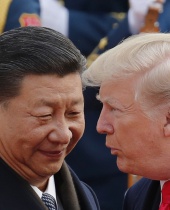 US-China Relations and the future of the ‘Pax Americana’

I. Pax Americana, the powerful hegemony constructed by the United States after WWII

In the postwar period the United States used its unmatched economic and military power to construct a hegemony of ‘peace’ for the sake of reconstruction and prosperity.


The United States maintained and strengthened its hegemony along three axes, managing financial markets through the dollar and the IMF and IBRD, world security through the UN and NATO, and oil supply through intervention in the Middle East.

II. China, having achieved military and economic development, now appears on the global stage as a new hegemon.


China is directly threatening the three pillars that support American hegemony by proliferating payments in yuan, establishing the AIIB/RCEP, and enacting the Belt and Road Initiative.


While many argue that, in spite of its rapid development, China will not attempt to replace the United States or create a new hegemony, the trade war between the US and China has sparked new signs of conflict between the two nations.

III. The Era of Hegemony or a New Multipolar Era?

The economic and military gap between the United States and China continues to shrink.


The clash between the United States and China could be a competition between two hegemonies, or it could signal the start of a new order.

There are two lessons that can be learned from the US vs. China

Lesson 1: China’s rapid development and Belt and Road Initiative pose a threat to the American hegemony that brought on an era of peace and prosperity in the post war period.