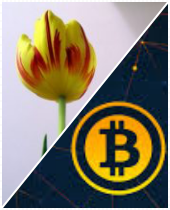 Financial bubbles from the Dutch Golden Age and now

I. The spice trade, Age of Discovery, and rise of the Netherlands

The spread of Islam to Europe and the consequent spice trade brought on the Age of Discovery starting from the 15th century.

II. Tulips and the South Sea Company: The start of the “bubble”

Overspeculation in the 17th-century Dutch tulip market was the most infamous financial bubble in history and the first case of capitalist speculation.


Wild speculation in tulip futures spread in England amidst the government’s bad policies and failure to take action.


Concerns were raised about a jump in prices and the creation of a bubble as investors and speculators flocked to Bitcoin, which hadn’t received much attention following its initial release.

There are three lessons we can learn through “Tulips and Bitcoins.”


Lesson #2: Scarcity and replaceability determine the value of a product or service.


Lesson #3: We must focus on the legacy that Bitcoin will leave to society.

Talk to your Ringle tutor about “Tulips and Bitcoins,” and also receive feedback on your English usage.

Videos
Articles
Bitcoin vs history's biggest bubbles: They never end well
The Blockchain begins to find its way in the enterprise
또는