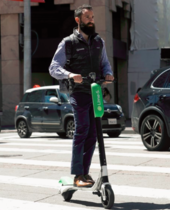 Rolling up to become the next Uber?

I. The new hit startup that has spread down the American West Coast in just a couple of months

There are currently people riding electric scooters, or e-scooters, all over downtown San Francisco.


Three startups are responsible for this rapid surge in e-scooter numbers, which has the city threatening to shut down operations over pedestrian safety concerns.


There is also an increase in number of bike-share users during this e-scooter boom.


Uber acquired the bike-share company Jump for nearly $200 million and now provides the bike-sharing service on its app, evidencing that shared bikes and scooters have become the hottest mode of transportation in the American West Coast.


II. The business model of scooter- and bike-shares

The scooter-sharing market is growing rapidly, using the fact that “when traveling short distances of 2-3 miles, you can move around more conveniently, quickly, and cheaply on an e-scooter than in an Uber” as its selling point.


Three companies are engaged in fierce competition over the scooter-sharing market and expanding the market scale.


Bike shares are being operated similarly to scooter shares, but being beaten out by scooters.

III. Impact on other industries

The existing traditional bike-share services are taking a hard blow.


Simultaneously, the global rideshare company Uber is also taking a blow to its business, as short-distance commuters within the city are taking the scooter instead of Uber.

However, it has been evaluated that scooter and bike sharing businesses can only succeed where the weather is temperate year-round and the air quality is good.


However, customers have the perpetual need for cheap yet convenient transportation, and scooter-sharing companies are offering modes of transportation that can replace cars.


Many agree that the key factors of scooter-sharing companies’ future growth are the direction of government regulation, the companies’ management of lost or broken scooters as the number of scooters increases rapidly, and their responses to collisions between users and pedestrians.


How will the future of scooter and bike share companies play out? Talk to your Ringle tutor about e-scooter startups and receive feedback on your English usage.