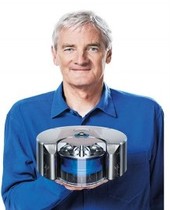 I. Dyson’s switch from a declining industry to a cutting-edge industry


However, the British company Dyson has created a new premium market by releasing iPhone-level products in the small home appliances market that was considered [1]past its prime.

II. The story of the entrepreneur who led Dyson’s innovation

James Dyson, a British inventor and the founder of Dyson, was born exactly 100 years after the birth of Thomas Edison; he is considered to be a genius inventor in his own right.


After inventing a new concept garden wheelbarrow, Dyson co-founded a company with his friend to manufacture and sell this product.


Despite the Ballbarrow’s success, Dyson was ousted from the very company he founded after insisting that they invent a new vacuum cleaner instead of focusing on their core(new) product.


In 10 years’ time, Dyson successfully invented a filterless vacuum cleaner and then founded his [2]namesake company.


Since then, Dyson has released new-concept vacuum cleaners, fans, and hair dryers at a technological level commensurate to the Apple iPhone, re-emerging as a global brand.


Recently, Dyson announced that he will release a new concept electric car by 2020, showing passion for a totally new invention once again.

Dyson uses a business strategy that is quite similar to that of Apple during Steve Jobs’ tenure as CEO.

First, Dyson focuses to the point of obsession on developing products that will amaze their buyers.


Like Apple, Dyson uses marketing tactics based on product exposure through advertisements and hands-on demonstrations at its flagship store.

There are three lessons that can be learned through Dyson.

Lesson #1: If you approach the problem from the customers’ perspective instead of the market’s, you can change the [4]red ocean market into a blue ocean market.


Lesson #2: Truly innovative invention takes a long time. But your efforts will not betray you.


Lesson #3: Core source technology opens the door for various areas of growth in the company.


Talk to your Ringle tutor about Dyson and receive feedback on your English usage.