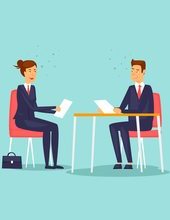 In contemporary society, people build work experience by continually seeking organizations that can help them grow as individuals.


In this process of developing their career, people must go through a difficult interview process to join the organization of their choice.


This Ringle lesson examines what makes an applicant successful from an interviewer’s perspective, using my insight as someone who has experienced numerous interviews from both sides of the table.


II-1. My time as an applicant who used to fail repeatedly

As an undergraduate, I prepared for interviews by focusing on differentiating my strengths from other applicants’. Back then, I thought I could differentiate myself with:


In retrospect, I think I practiced packaging myself as a special person ready for the job.


However, my interview results at the time were much more often bad than good, and I didn’t feel all that great leaving the interview either.

My attitude as an interviewee began to change while I was preparing for an interview with a consulting company during my last semester of college.


Because it was for my first job, I was preparing to the best of my abilities using my previous strategies. But I was really struggling, unable to form any satisfactory answers for possible questions, and often scolded during mock interviews by senior students.


A week before the big interview, I learned an important lesson when I became an interviewer to help a club select its new members. While watching someone who was doing exceptionally well in the interview, I started thinking about why this applicant was winning me over—and this consideration brought about a lot of changes.


At the long-awaited interview, I was able to honestly lay out when I came to take interest in strategic consulting and how I became so passionate about consulting, while sharing anecdotes about the many trials and errors I’d experienced over the past six years. I enjoyed the interview and thought right after, “Even if it doesn’t work out, I have no regrets.”


After passing the first interview, I could feel that my answers were consistent yet varied, even when I met different interviewers in the following rounds. I think I was able to tell my story to whomever I met because I was offering my honest thoughts and accounts of experiences. I could feel myself giving honest and extemporaneous answers rather than canned responses and found the interview very enjoyable as a result.


In this way, I was finally able to enjoy the interview process and get the job.


III. My revelations as an interviewer

After I was promoted to consultant at BCG, I participated in job interviews as an interviewer. The applicants who gave off the impression that “they wouldn’t work well, even if they got in” shared these qualities:

IV. My repeated mistakes as an applicant

Just as I thought that I could now confidently take on any kind of interview, I faced another interview-related ordeal while preparing for an interview in English to enroll in an MBA program.


As someone not confident in their English skills, I told myself to “look like someone who’s fluent in English, at least for those 40 minutes during the interview.” So I wrote a thorough script in English for the possible questions and perfectly memorized it.


But because I didn’t want to have any regrets about my Stanford reapplication interview, I was determined to come out of the interview having said all the things that I really wanted to say, rather than relying on a script. It ended up being the worst interview in terms of my English (grammar, syntax, etc.), but it was the interview I regretted least. And I got into the program!


While preparing my MBA interview, I made the same mistake yet another time. My attempt to do the interview with memorized answers prepared in advance, in a way, was a repetition of the mistake I made in college. The interview that I finally passed didn’t rely on a script like I had in the past; I focused on the interviewer and came out having talked about everything I wanted to talk about.

V. My definition of what makes a successful interview

Because everyone has their own strategies for interview success, I don’t think there is a golden rule for acing an interview. On the contrary, I think there must be a strategy that suits each person.


I just have these following impressions to offer, having participated in numerous interviews as an interviewer:


I think the ideal interview preparation process is as follows: