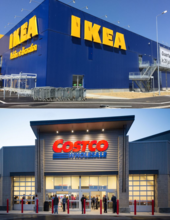 I. Story of two retailers who have maintained strong growth even as Amazon continues to upend the retail industry

With the “Amazon Effect,” dominant retail giants like Walmart, Macys, Sears, Barnes and Noble, and Toys R Us, are [1] teetering on the brink.


However, in spite of the damage of the “Amazon Effect” on the offline retail industry, Costco and IKEA have experienced sustained growth, generating revenues and profits comparable to that of Amazon.


How have Costco and IKEA survived when Amazon is taking over the retail industry and upending once dominant offline giants? How exactly are they able to sustain their strong growth?


The success of Costco lies in the company’s ability to provide “quality goods at the lowest possible prices”. Costco has a methodically designed business model in place to ensure this goal.


→ In one sentence, Costco’s secret to success is “Lowest possible prices through massive simplification.” This is in striking contrast to Amazon’s mission to “be a place…to discover anything they might want to buy.”

James Sinegal’s passion and discipline has also been critical to why Costco has stayed true to its founding principles for over 30 years.

IKEA is another warehouse-style retailer that sells high quality and well-designed ready-to-assemble furniture at affordable prices.


IKEA began in 1943 in Sweden as a mail-order sales business and opened its first furniture store in 1958. Since then it has begun expanding internationally, regularly opening locations in a new country every 1-2 years to eventually become the largest furniture retailer that it is today.


The success of IKEA also lies in the company’s ability to provide “quality goods at lowest possible prices”, a philosophy built into the company’s business model.


Like Sinegal and Costco, Kamprad’s leading by example lifestyle has been critical to how IKEA has been able to stay true to its founding principles, provide quality furniture products for its customers, and ultimately bring about the company’s success.


IV. Similarities between Costco and IKEA


Similarity 1_The key to retail is not “location strategy or accessibility”, but “selling high quality products at low prices”


Similarity 4_Generously invest in people and your employees


Similarity 6_As founders, never lose sight of the company’s founding principles, and lead by example.

Outlined below are what Korean retailers can learn from Costco and IKEA.


Once-dominant retail giants are teetering on the brink due to the “Amazon Effect”, but Costco and IKEA have maintained strong growth. What are your thoughts on this? Also, what are some key takeaways from these companies?

Videos
Articles
The secret of IKEA's success
What Makes Costco So Successful?
또는