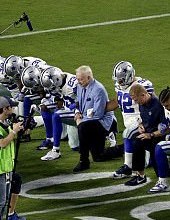 Taking a knee: NFL as a platform for race politics

The biggest stars in professional football and basketball (the NFL and the NBA) are on a collision course with the President of the United States Donald Trump.


The NFL and the United States National Anthem Demonstrations


As we can see, the President of the United States has antagonized the biggest players of the NBA and the NFL. Reminiscent of his days as the star of the hit show “Apprentice”, Trump announced that players who do not stand during the national anthem should all be fired.


Although there are cases to be made on both sides in this public debate, one can safely say that most of the public have sided with the athletes and teams. Outlined below are the arguments for and against the national anthem protests.


For the Korean public, these controversies bring to mind a very recent and similar incident that rocked the entire nation.


What is your opinion on star athletes and celebrities publicly speaking out on social and political issues?
How do you think governments should respond to politically outspoken stars, if at all?
Where do you stand on the issues between President Donald Trump and professional football players?
How do you feel about the Korean “blacklist” controversy?

Gain an authentic perspective of the situation through engaging dialogue with your Ringle tutor, and learn to speak more fluently.