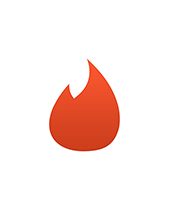 Tinder is one of the hottest mobile applications among 20 and 30-year-olds in the US.


Having outcompeted its strongest competitors (i.e. Match.com and OkCupid), Tinder has monopolized the US market and emerged as a unicorn valued at $1.35 billion.


Recently, Tinder has been focusing on enabling people to build meaningful relationships with others around the globe.

There are four leading factors for Tinder’s early success and popularity.


2. In its early days, Tinder acquired customers through college student-specific events and by word-of-mouth.


3. Low-cost, high-efficiency marketing with the help of “[7]influencers.”


4. The changing attitudes about online dating in the Americas and Europe.

⇒ This attitude towards online dating is completely different from that of Asia, where people tend to be ashamed of and hide the fact that they met their partners online.

Since its release, despite its success, Tinder has also been the subject of much controversy.


To counteract the rising concerns, Tinder released its own research maintaining that the app does not cause inappropriate meet-ups or have a negative impact on society.


Nevertheless, the service and business models of Korean mobile dating apps are quite different from those of Tinder.

⇒ Tinder’s basic functions are free, while features that increase a user’s chances of finding a match are charged. Korean apps encourage users to prioritize others’ appearances and charges a fee to participate in the app.

In addition, the perception of online dating services in Korea is drastically different from America’s.

What are Tinder’s success factors? How does Tinder compare with Korean mobile dating apps? What differences exist between the social perceptions of online dating services in Korea and the US? Will the Korean online dating market be as receptive to Tinder as has the US? Are online dating’s social benefits larger than its costs?


Please take this time to discuss this topic with your Ringle Tutor and improve your spoken English.

Videos
Articles
Tinder men are not all they seem: Male users of the app have low self-esteem
Why Tinder is making women MISERABLE: Men swipe right for an ego boost with no intention of speaking to matches
또는