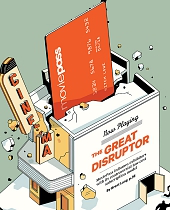 Can movie theaters ensure their survival in the future?

I. The Film Industry and Movie Theater

The movie theater has long enjoyed its monopolistic status as the very first platform to introduce movies to the public. And the term box office has served as a barometer of overall profits generated by movies.


The first movie theater in the US opened in 1905. Since that time, the theater industry has grown tremendously alongside technological and societal changes. Today, the market is dominated by 3 companies.

II. Movie Theaters Facing a Crisis and the Growth of AMC

Combined with significant social change over the years, the emergence of new services (e.g. VOD and PPV) and the growth of Netflix, which is re-defining the film industry by producing its own contents, pose a significant threat to move theaters.


Established in 1920, AMC grew to become the largest theater chain in the world. AMC has overcome serious social and technological challenges by constantly and relentlessly innovating.


III. The Future of Movie Theaters

As the title of Cinemacon 2018 suggests – A Glimpse at the Future of Moviegoing – many in and outside the industry are voicing concerns about the future of movie theaters.


There are also those who believe that the movie theater will evolve again in response to emerging threats, as it did in the 1950s after the television was introduced.

There are 2 lessons to be learned from the future of moviegoing.

Lesson 1: The emergence of a new, groundbreaking service in a market can result in a reshaping of the entire industry. This sometimes can result in the destruction of traditional market ways.


Lesson 2: Survival in the midst of social and technological change requires relentless innovation, fueled by a deep understanding of products and services at their core.


Have a 1:1 debate in English with your Ringle tutor about the future of moviegoing as you improve your English skills.

Videos
Articles
Cinema Is Dying: How Movie Theaters Can Ensure Their Survival
MoviePass could save movie theaters — and kill the theatrical experience
또는