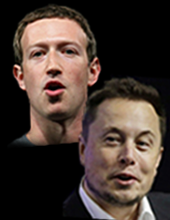 Artificial intelligence (AI), a topic discussed in pop culture as being “good” or “evil” has now become a central theme in Silicon Valley.


Of recent, the press has been focusing on Mark Zuckerberg and Elon Musk’s public debate on AI and whether this technology is “good” or “evil.”


Media outlets in the US watched as the debate unfolded. The coverage tended not to pick one side over the other, but rather reported on the arguments produced by each person.


AI: will it be a force of destruction or a life-saving advancement for mankind?

From the beginning, Elon Musk was against the commercialization of AI, predicting that the technology would have a negative impact on humanity.


There are many besides Elon Musk who are convinced that AI will have a negative impact on humanity.


Elon Musk is a champion of the “humanness” of humanity and trusts the superiority of the human brain. Therefore, he is investing in technology that can maximize the potential of the brain.


However, because Elon Musk knows that he cannot simply ignore the growing presence of AI, he has focused instead on investing in research geared towards monitoring AI.


Elon Musk maintains a pessimistic view of AI, but is investing in technology aimed to monitor and moderate the technology.

Unlike Elon Musk, Zuckerberg is confident that AI will make society only safer and more productive.


In addition to Mark Zuckerberg, executives of Google and other companies that use big data have demonstrated enthusiasm for AI and its potential to revolutionize service-related or technical industries.


Zuckerberg is using AI to further Facebook’s mission to “bring the world closer together.”


Several Silicon Valley startups are also developing their own AI capabilities because they are aware that Facebook and Google are onto an innovation that will profoundly shape the future.


Mark Zuckerberg is aware of concerns that AI can be used for evil. However, because he believes that companies like Facebook could use AI for good, he thinks that this field should be unregulated and financially supported.


IV. A future shaped by AI

AI is a [7]double-edged sword. It can destroy humans or make their lives more fruitful. Therefore, the world is paying attention to how regulations might develop around this innovation.

What is certain is that AI technology will continue to develop. [8]The crux of the argument for or against this tech is how it will be applied to our everyday lives.

Unfortunately, South Korea is far behind the United States, China, and Japan in AI technology.


Do you think that AI will have a positive or negative influence on humanity? How will our lives unfold around AI? How should Korea approach AI and develop AI capabilities? Should AI be regulated in Korea?

Please take this time to discuss this topic with your Ringle Tutor and improve your spoken English.