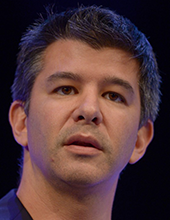 I. How Uber grew and scaled so quickly

→ Unlike KAKAO Taxi, which connects regular cabs with passengers, Uber bridges together regular car-drivers with riders via a dynamic and convenient smart phone app.


Since launching in 2009, Uber has destroyed the taxi industry in key cities around the world and operates in 80 plus countries today.


To catch up to such tech giants as Google and Amazon, Uber has pursued aggressive methods of expansion and innovation.


At the heart of such aggressive growth and innovation was founder and CEO Travis Kalanick.


Uber has also been criticized for breaking laws to disrupt its competitors.


Finally, Uber is [3]taking heat for its unethical practices and workplace culture.


As a result, many of Uber’s employees are leaving the company.

III. The world’s and our view of Uber

Despite the barrage of controversies, Uber’s business continues to expand.

→ Customers’ views on Uber rely more heavily on the convenience of the app, rather than the questionable ethics of the company. This is how Uber has lasted through all of its negative publicity.


Significantly, Travis Kalanick, who was also at the core of much of the controversies, has resigned from his post as CEO.

→ Uber is communicating to its employees, drivers, and customers that it is truly changing for the better.


However, those who prefer Uber as a “hustling” company, rather than an “ethical” company, have voiced their support of former CEO Kalanick and his return to his position.


There are two questions that arise from the history of Uber and Kalanick’s story.

Please discuss Uber with your Ringle Tutor and take the opportunity to work on your spoken English.

Videos
Articles
Inside Travis Kalanick’s Resignation as Uber’s C.E.O.
With Travis Kalanick out, we'll see the real value of Uber — and it won't be pretty
또는