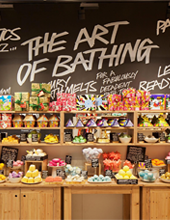 When marketing their products, cosmetic brands promise customers beauty or the fulfillment of dreams. The companies may use these elements:


However, there is one company that has been wildly successful despite not using any of these elements: Lush.


What makes Lush so special?

→ Motivated by his experiences with nature, Constantine resolved to dedicate his life to protecting animals and the environment.


Initially, his attempts to launch an environmentally-friendly beauty line were unsuccessful. But his first two failures became valuable learning experiences that culminated in the creation of Lush.

→ Two failed businesses later, Constantine was determined to start a business that would stay true to its core values. This led to the founding of Lush in 1995.

III. Lush: A Brand with a Philosophy

1. Manufacturing: The founding members of Lush produced the goods by buying the ingredients from grocery stores and making them in their own kitchens.


2. Product: Constantine’s background as a hair designer and environmentalist rubs off on the creative, vibrantly colored, and fragrant products, which come in all shapes and sizes and are vegetarian.


3. Packaging: To reduce their environmental impact, Lush has tried to minimize their use of plastic, supplying what they call 'naked cosmetics.'


5. Ethics and campaigning: Lush has launched several campaigns aimed at raising awareness about and fighting against animal testing and human rights violations.

Lush’s quirky products and unique philosophy have won the hearts of many customers. The company currently operates over 900 stores in 50 countries.


Just as Lush stands firm with its philosophy, it has taken a unique stance on foreign expansion.

V. For your consideration

Looking back on Constantine’s professional trajectory, we can imagine that he had several opportunities to make a lot of money. But because he stuck to his beliefs, he gave up his deal with The Body Shop and even rejected the opportunity to expand into China with Lush.

Lush was not afraid to voice its concerns about the environment and social causes. Some customers have even boycotted Lush for their LGBTQ rights campaigns.

Is Mark Constantine a good businessman or just a successful philosopher?

In addition, what are your thoughts on Lush being simultaneously a profit-maximizing firm and the focus of controversy?

Please take this time to discuss Lush and its controversies with your Ringle tutor.