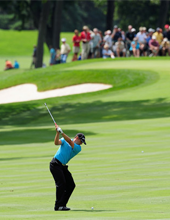 I. The decline of the global golf market

Until the mid-2000s, the global golf market was growing at a relatively stable pace.


However, after the mid-2000s, the market’s growth began to plateau, particularly in the United States.

⇒ With the arrival of the age of information technology, people have access to a diverse array of recreational activities. Therefore, younger generations in developed countries opt for more active and dynamic sports than golf.

The expansion of golf in some countries is unlikely to offset global trends moving away from this social sport.

⇒ The rising popularity of golf in the handful of developed and newly-developed countries is unlikely to make a dent on the international golf market.


In conclusion, the golf market is facing a major existential crisis.

II. The rise of new players in the golf industry

Golf-based offshoot services are adding to the market.


In Korea, screen golf, which was first commercialized by the company Golfzon, is leading the growth of the domestic industry.


In the US, Topgolf, a sports entertainment company offering “games, food, and fun”, is rising above the faltering golf market.


III. Topgolf: the perfect blend of golf and entertainment

Topgolf’s vision was to provide a space where rookie golfers can [3]ease into the sport through related games.


Though primarily operating in the western and southern United States, Topgolf has succeeded in expanding internationally using an [4]airtight business model.


Topgolf’s service model: to be a premier golf entertainment complex where the competition of sport meets your favorite local hangout.


Top Golf has made meaningful progress in the US and continues to expand globally.


Experts cite four main reasons to Topgolf’s success in the US.

Though Topgolf has been successful in the US, this does not necessarily mean that it will be received as well in Korea.

Will Topgolf become successful globally? If Topgolf were to launch in Korea, do you think it would be as popular as screen golf? What must the golf market do to usher in a second “renaissance” of the industry?

Please discuss the golf market and Topgolf with your Ringle Tutor. Take the opportunity to improve your spoken English.

Videos
Articles
THE DEATH OF GOLF: TIGER WOODS HAS LOST HIS MOJO, MILLENNIALS ARE NOT GOLFING, BABY BOOMERS NOT FILLING THE VOID
To Make Golf Fun, Just Add a Nightclub
또는