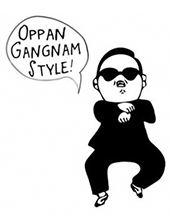 I. What is it about the song “Gangnam Style” that made it an international hit?

In July 2012, the world was hit with “Gangnam Style”, a song released by Korean singer Psy.


The media flocked to divulge the secrets to the song’s success. As a result, they identified five main factors.


However, most people do not know that Psy had already debuted ten years prior to the release of “Gangnam Style” and that he has produced several other hits in Korea.


What was it about "Gangnam Style" that captured the attention of the world? Why was this song so beloved by people around the world?

II. Why has Psy failed to maintain prestige like that of other global musicians like Adele or Maroon Five?


Psy’s popularity is still evident from the number of views that his post-“Gangnam Style” music videos have received.


However, none of Psy’s subsequent songs have gained as much publicity or popularity as did “Gangnam Style”.


Though there may be an obvious explanation for why this has happened, Psy’s [3] rise and fall contrasts greatly with artists with a history of sustained popularity like Maroon 5.

⇒ Judging Psy based on “Gangnam Style” alone may make him seem like one of the most popular artists of all time. But the truth is that his subsequent songs have not had the same traction or reception. Psy was a [4] one-hit wonder, much like Los Del Rio (“Macarena”), Dexys Midnight Runner (“Come on Eileen”), and Vanilla Ice (“Ice Ice Baby”).

Why has Psy failed to sustain his popularity in the US? What differentiates Psy from other global pop stars like Adele, Maroon 5, and Taylor Swift?


III. What are the factors that prevent K-pop from taking over the global market?

There are several other K-pop musicians that have gained an international following.


Most K-pop fans are found in Southeast Asia. The North American and European fan bases are not as well-established.

Why have Korean musicians failed to gain a following in countries outside China and Southeast Asia? What should they do to overcome such barriers?