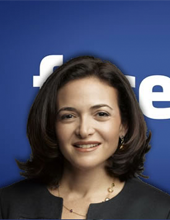 I. Thinking beyond her elite status

→ Sandberg stood out, even among some of the smartest individuals in academia.


However, Sandberg did not choose to take the path that most in her position would. That is, her decisions reflected that a high salary and a broad network were not her priorities.

→ Unlike many Harvard graduates, Sandberg made career decisions based on the challenges they offered. This factor, among many others, put her on the track to become one of the most influential leaders of her time.


What were the key factors that enabled Sandberg to become not just a successful career woman, but also an influential world leader?

Sheryl Sandberg is not your conventional elite of the capitalist world, nor is she a self-made entrepreneur. What set her apart was first, her courage in seizing three key opportunities, and second, her dedication to fulfilling these roles.

(Opportunity 1: Larry Summers) After college, Sandberg accepts her mentor Larry Summers’ offer to work at the World Bank for a year. She then returns to work as Summers’ Chief of Staff from 1996 to 2001.

→ To this day, Americans remember the Clinton administration for its spectacular economic policies.


(Opportunity 2: Eric Schmidt) With the transition to the Bush administration, Sandberg loses her job at the White House. She is promptly hired by Google CEO Eric Schmidt and stays at the company for 8 years.


(Opportunity 3: Mark Zuckerberg)Sandberg leaves Google for Facebook after meeting a like-minded business partner in Mark Zuckerberg. She has been working there ever since.

→ Sandberg has been one of the most influential figures in Facebook’s overall success in the past decade.

There are four lessons we can take away from Sandberg’s life.

1. Be faithful to and never stop improving the fundamental service of your business.

→ Sandberg wasn’t a simple-minded ad-[3]peddler. She changed the game by making ads a win-win situation for companies and consumers.

→ Sandberg’s life teaches us people will recognize those who have a giving attitude and the courage to challenge convention.


3. If you love what a company does and believe in its potential, dedicate at minimum seven years toward making a meaningful contribution.

→ A meaningful contribution requires not simply wit or experience, but also commitment.


4. To become a global leader, make valuable contributions to the world.

→ Sandberg may not be the leader of her own company, but she has nonetheless shown that it is possible to lead others by setting an example through the lessons learned throughout one’s life.


IV. What kind of life should we be living?

How is your work life? Are you doing all that you can to improve your firm’s core service? Do you go to work with a positive attitude that sets an example for others? Are you seizing all the opportunities around you? Are you voicing yourself in your circles and society?

Please discuss the lessons obtained from Sheryl Sandberg’s life with your Ringle Tutor.

Videos
Articles
Why A Career Jungle Gym Is Better Than A Career Ladder
Facebook’s Sheryl Sandberg: ‘No one can have it all’
또는