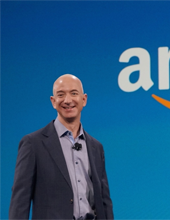 Amazon.com is an American electronic commerce and cloud computing company. It is the largest Internet-based retailer in the world by total sales and market capitalization. The company strives to make the world a more accessible place for all consumers with its services.

With roughly 300 million active users worldwide, Amazon reported $136B in revenues but $0 in net profit in 2016 and is currently valued at nearly $430B.

⇒ Amazon is twice the size of Korea’s largest corporation, Samsung Electronics ($230B).

Despite this, we observe Amazon flourish and produce innovative products. How has this been possible?

The company was founded in 1994 as an “online store.” For its first 2-3 years, Amazon focused on being an online bookstore, building itself to become the biggest book distributor in the world.

Amazon has since been increasing its number of product categories and is currently the largest online general shopping platform in the world.

With the development of Amazon Kindle, the company created and dominated the e-reader industry and has also functioned as an online content distributor.

In recent years, Amazon has made advances in the shopper experience with AWS.

III. Amazon competes with tech companies around the world

It is becoming clear that Amazon’s main competitors are not other retail companies, but rather tech companies like Google, Apple, Microsoft, and SpaceX.

Google is likely to be Amazon’s greatest adversary. In the battles for online commerce searches, data storage, and artificial intelligence, Google is leading the industry.

Amazon leads the e-book market, with a close competitor, Apple, trailing behind.

Despite these successful projects, Amazon has been losing talent to Google, Apple, and Microsoft, which is cause for concern in the years ahead.

Jeff Bezos has grown Amazon by emphasizing its customers, the need to be up-to-date on tech trends, and efficient decision-making.

How will Amazon influence customers’ lives in the future?
Has Amazon earned a rightful place alongside Google, Apple, Microsoft and SpaceX?
What kind of businessman will Bezos be remembered as?


Please discuss Amazon with your Ringle Tutor and take the time to work on your spoken English.