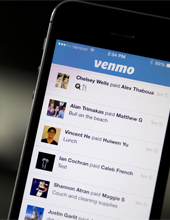 1. The irony of online financial businesses

The online financial industry can be divided into four fields of business.


Of these, online banking and E-payments require customers to invest a minimum amount before being able to use the services. As a result, the market has been oriented to favor large, established banks and businesses.


On the other hand, many of the biggest P2P lending and mobile payment companies began as start-ups.


It is worth noting that small to medium sized companies, like those in the P2P lending and mobile payment industries, are expanding faster in the online financial market than large corporations.


Of these four areas, we will delve deeper into the structures of the mobile payment and e-payment markets, and we will analyze what lies at the core of these industries.


2. Venmo: the pioneer of the mobile payment service industry

Venmo is a mobile payment service owned by PayPal which allows users to transfer money between one another using a mobile phone app.


Venmo was founded by two friends, Andrew Kortina and Iqram Magdon-Ismail, who met as freshman roommates at the University of Pennsylvania. PayPal purchased the service in 2013.


Venmo has outpaced JP Morgan, Bank of America, and other major banks in the mobile payment market. It is continuing to grow today.


The reason Venmo has been so successful is because the quality of its services far exceeds those of large banks at a fraction of the price.


Venmo’s weaknesses include its inability to expand globally and the fact that its profit model operates at a deficit. However, the company has been using foreign investments and profit model restructuring to overcome these obstacles.


3. Google, Apple, and Samsung struggle to find their place in the e-payment industry.

The e-payment industry has been a bloody battlefield for Apple, Google, Samsung, and other major IT companies.


An advantage that these three companies share is that they allow users to make offline purchases with the same cards they use for e-payments.


Unfortunately, American consumers have not been very enthusiastic about using the three companies’ e-payment services, and they continue to use cash or physical cards to carry out transactions.


Because of these issues, the number of users and transactions remains low in the e-payment market.


The services that ultimately succeed in the online finance market are those that offer solutions for customers’ problems rather than those that spend a lot of money on developing fancy platforms.


What is the future of the online finance industry? Will Venmo become as influential as Google, Apple, and Amazon in the future? How should those in the e-payment industry address the issues we see?

Please discuss this topic with your Ringle Tutor, who is likely familiar with Venmo, and take the time to improve your spoken English.

Videos
Articles
Cash Is for Losers! How the mobile app Venmo became a verb. Among millennials, anyway
Apple Pay, one year later: Why mobile payments have failed to catch on as we're still looking for something better
또는