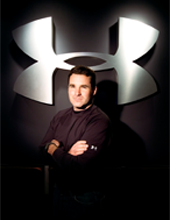 I. Under Armour: a worthy competitor in the sporting goods market

The sports apparel and equipment industry has long been divided into three groups.


However, in 2014, Under Armour, a company that creates “sportswear for athletes,” emerged to be a significant threat to the US market.


Despite a recent fall in Under Armour’s stock, experts assert that the company has what it takes to compete against Nike and Adidas.

II. Under Armour’s history and its differentiators

Under Armour was founded in 1996 by Kevin Plank. Plank played American football in his school years, but he was also matchless among peers in his business acumen.


Upon graduating from Maryland, Plank pursued a business idea that had arisen because of the discomfort he had experienced while wearing cotton T-shirts as a football player. He hoped to find a material that would absorb the sweat from his body more efficiently and thus threw himself into the sporting apparel industry.


Under Armour, by spending its first five years on developing an unparalleled athletic undershirt, quickly rose to the top in its industry and IPO'd on the NASDAQ in November 2005.


After its IPO, Under Armour launched a hugely successful [2]“underdog”marketing strategy, branding itself with an image that contrasted with those of Nike and Adidas.


For 23 quarters straight, Under Armour increased its earnings and has become one of the premier sporting goods brands along with Nike and Adidas.


III. Five takeaways from Under Armour

1. Keep your focus – let the quality of your products market themselves.


2. It is more important to be a company that solves problems than one that sweeps the market.


5. Don’t become reliant on outside investment. Grow your business using the money you earn through sales.

IV. The future of Under Armour

In 2017, Under Armour must consider three key questions that could determine its future.

Please discuss Under Armour with your Ringle Tutor and take the time to improve your spoken English.

Videos
Articles
“I Will” vs. “Just Do It”: The Under Armour Success Story
4 Ways How Under Armour Grew To Steal Adidas’ #2 Spot
또는